Date Creek flows through an area where the Sonoran and Mojave Deserts meet. Along its course giant saguaro cactuses and Joshua trees stand side-by-side.

When Phil Knight purchased the Date Creek Ranch much of the three miles of the stream that flowed across the ranch was in the same condition as the stretch on a neighboring ranch shown before that ranch followed Knight’s lead. Phil made it his goal to return Date Creek to a condition as much as possible as it was before ranching came to the area. One measure of the success of that restoration, he decided, would be the return of beaver to this desert oasis they had once inhabited.

Over the years, the habitat along the stream began to respond in dramatic fashion. On one tour of the area the supervisor of a nearby Nature Conservancy preserve joked that she would kill to get as much biodiversity on her preserve as Phil Knight had managed to restore to his ranch.

At about that time, the owners of the adjoining ranch upstream (the O X) began managing their stretch of Date Creek in a similar manner–grazing during the dormant season; rest during the growing season–and it responded just as impressively. Because of the combined success of the two ranches, the Arizona Game and Fish Department decided to reintroduce beaver into the ecosystem, and those natural riparian restorers began to shape the recovery of the stream. The photo to the right and the one below it were taken on the O X in roughly the same area as the photo at the top of the page about four years after beaver had been reintroduced.

So far, the Date Creek beaver have survived a 500 year flood and two extremely dry years. One of those years produced only 4 inches of precipitation. That year the creek nearly dried up, but when the rains returned, and the water started to flow again, the beaver were still there. 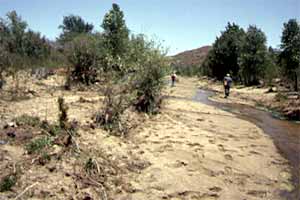 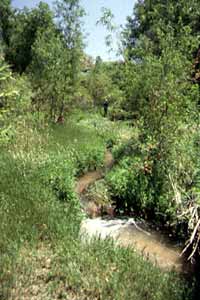 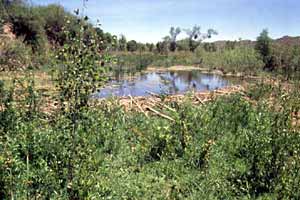 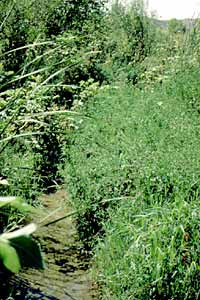